Allah, Aimma & all (that is; all that exists; all creations (created creatures) of Allah)

[Shakir 59:22] He is Allah besides Whom there is no god; the Knower of the unseen and the seen; He is the Beneficent, the Merciful

[Pooya/Ali Commentary 59:22]
These verses contain the most beautiful names of Allah which give us the fundamental basis on which we can have a glimpse of the glory of Allah. Refer to the commentary of Fatihah: 1.

The goodness found in the created beings are the reflection of His inseparable attributes. He is the real owner of all excellences.
Imam Ali said:

(Selected sentences taken from various sermons of the Nahj al Balagha).
[Shakir 59:23] He is Allah, besides Whom there is no god; the King, the Holy, the Giver of peace, the Granter of security, Guardian over all, the Mighty, the Supreme, the Possessor of every greatness Glory be to Allah from what they set up (with Him).

[Shakir 59:24] He is Allah the Creator, the Maker, the Fashioner; His are the most excellent names; whatever is in the heavens and the earth declares His glory; and He is the Mighty, the Wise.

With the exception of this name, all other names that describe Allah in the Holy Quran are known as the Asma ul Husna:

The phrase Asma ul Husna, made up of the word asma, the plural for "name", and husna, meaning beautiful or most beautiful, means "Allah's most beautiful names." The names which are attributes of Allah can be found in the Holy Quran.

In order to familiarize ourselves with Allah, one needs to be familiar with the meanings and implications of His attributes listed below. 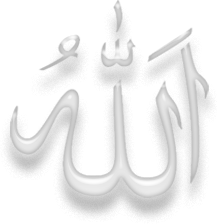 The water, the thirst, the wait.

Your love has turned me into a drunkard,
O my beloved, strange now is my situation.

I looked around to find You, Your standard,
The only glimpses, I realize, were Your creation.

I searched & search, the sights turned backward,
As I sought, it only increased & intensified my intoxication.

Let me drink another sip, Your love makes me move forward,
Like a vagabond I wander; to search & reach Your Proof (Hujjat), a materialized manifestation.
---[to be continued]

The water, the thirst, the wait.
The mirage of an oasis & some seashore sounds,
This unquenchable mirror my meditations and memories of old,
These revival reflections, remembrance of an age now only glimpses gone by me.
Wondering wander, waking with closed eyes, this was a situation of a soul in sleep day dreaming, strange were the scenes of thirsty water.